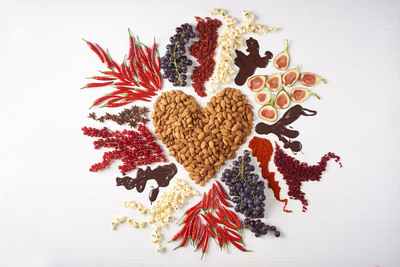 Modesto, CA (26 May 2020) – For decades, researchers have investigated how eating almonds promotes heart health and now, there’s a novel discovery related to almond benefits.  In a newly-published study1, snacking on almonds improved endothelial function, which is a key indicator of vascular health.  In addition, consuming almonds instead of a usual snack also lowered “bad” LDL-cholesterol, which is consistent with previous research.  The study was funded by the Almond Board of California.

The study was a 6-week randomized control, parallel-arm trial, where participants (with above average cardiovascular disease risk) consumed almonds or a calorie-matched control snack providing 20% of each participants’ estimated daily energy needs.  The research team then compared cardiometabolic health markers between the two groups.  They found that the almond group, compared to the control group, had increased endothelium-dependent vasodilation by a 4% unit increase (measured through flow mediated dilation or FMD), which is a strong predictor of the initiation and progression of the disease atherosclerosis.  Improved FMD means that arteries can dilate more easily in response to increased blood flow, which is a strong indicator of cardiovascular health.

LDL-cholesterol levels decreased in the almond group relative to the control group.  There was no difference between the two groups in liver fat and several other measures (triglycerides, HDL-cholesterol, glucose, insulin and others).

“This study shows that eating almonds in place of the typical snacks that many of us consume (such as crisps, biscuits and pastries) is beneficial for our heart health by reducing levels of bad LDL-cholesterol and improving the health of our arteries.  Based on existing data on risk of cardiovascular disease, we predict that replacing typical snacks with almonds in the long term would result in a 30% reduction in the adjusted relative risk of a cardiovascular event,” said Dr. Wendy Hall, PhD, co-principal investigator and Reader in Nutritional Sciences at King’s College London.   Adjusted relative risk is the probability of an event happening to a person compared to another person who does not take a step in disease prevention, such as making a diet change.

Besides the new FMD finding in the almond group, the study took an innovative approach to the comparison food used in this study.  The researchers developed a control food that was carefully matched in terms of fat and sugar (14% of energy from saturated fat and 23% of energy from sugar) to reflect a typical UK snack (excluding fruit) derived from the UK National Diet and Nutrition Survey (NDNS).  This neutral comparator snack helped determine that the almonds, and nothing else, were responsible for the beneficial changes in health markers.

Limitations of the study were the fact that there were some differences between groups in cardiometabolic disease risk factors at baseline.  The imbalance in recruitment by sex could mean that the results may not be as applicable to men since they made up only 30% of the randomized study population. Also, the participants were free-living, and although almond compliance was confirmed, it is possible there is potential for some inaccuracies in their reported food intake.

The degree of improvement in endothelial function and LDL-cholesterol levels suggests that replacing typical snacks with almonds (as 20% of total calories, equivalent to  about 2.5 servings or 70 grams) has the potential to reduce adjusted relative CVD risk by 32%.  Replacing typical snacks with almonds can have positive impact on daily nutrient intake and potentially play a role in improving cardiovascular health.