Snack of almonds vs. a high-carbohydrate snack food resulted in a lower blood glucose response and fewer calories consumed over the course of the day

Modesto, CA (11th November 2021) –. When it comes to snacking to help you push through the morning slog, what you choose to eat can make or break your morning and impact how you eat the rest of the day. A new study[1], funded by the Almond Board of California, showed that a morning snack of almonds (compared to a common high-carbohydrate option) helped keep blood sugar levels more stable and trimmed the number of calories eaten over the course of the day.

In this study of 100 New Zealand adults aged 18 – 65 years, participants ate either at least 42.5g of unroasted almonds or a calorie-matched sweet biscuit snack (the most popular usual snack according to a survey). Both snacks accounted for 10% of total calorie intake, so in some cases, the amount of snack consumed was higher.

This study had a randomized crossover design, meaning that each participant completed the study eating the almond snack and then repeated the study eating the biscuit snack on a separate day, or vice versa, with a washout period between each treatment. On the test day, participants ate a standardised breakfast. Two hours later, they ate their assigned snack food. Blood glucose and appetite ratings were measured at baseline and at 15 or 30-minute intervals after they finished eating. Two hours after the snack, lunch was offered to participants, who ate as much or as little as desired and consumption was recorded. Participants then recorded their food intake for the remainder of the day. 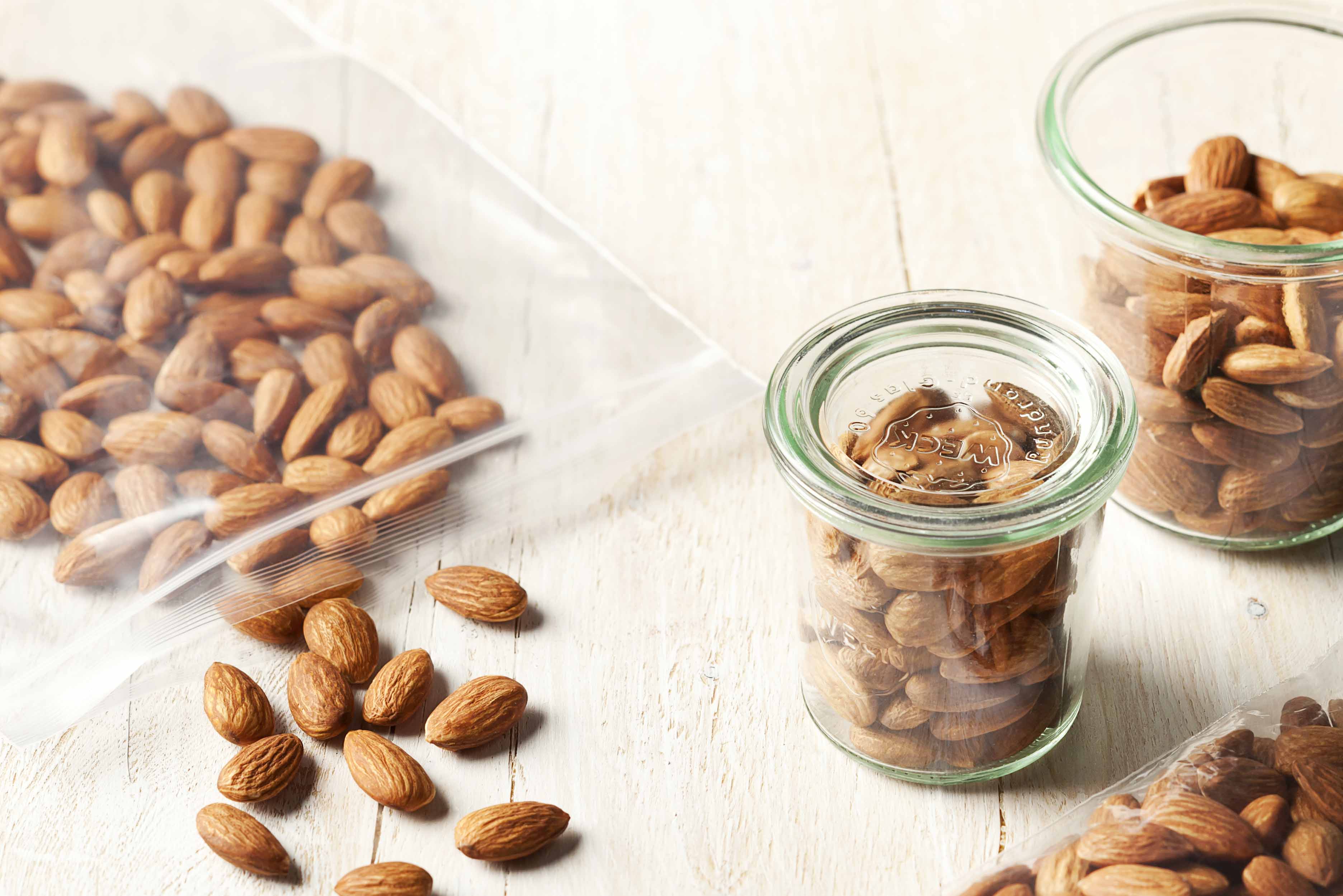 There were no differences in the amount of calories eaten at lunch after the almond or biscuit snacks. However, based on the participants’ food intake records, those who ate the almond snack reported eating ~150 calories less (on average) over the course of the day. If sustained, this calorie deficit could theoretically result in approximately half a kilo (about a pound) of weight loss per month.

This single-day analysis is part of a year-long study examining the long-term implications on weight management. Observations from this acute study are consistent with results from a previous study[1] published in the European Journal of Nutrition. Researchers found that a mid-morning snack of almonds (42g), compared to no snack, helped control appetite and resulted in fewer calories eaten at lunch and dinner. Results of this previous study suggest that rather than skipping out on a snack, eating almonds as a mid-morning snack may help curb hunger.

“Our results showed how eating almonds as a snack in the morning resulted in participants spontaneously consuming fewer calories over the course of the day,” said Dr. Rachel Brown, Lead Researcher and Professor at the Department of Human Nutrition, University of Otago. “Also, our study showed that almonds tempered the post-snack blood sugar response. This is important because consistenty high blood sugar levels after eating a snack or a meal may be associated with increased risk for heart disease and for death from all causes, whether a person has type 2 diabetes or not.”

This study was an acute randomized crossover design involving two treatments comprised of 10% of energy from either raw almonds or sweet biscuits. Participants were randomly allocated to the intervention so that they received the two treatments in balanced order. There was at least a one-week washout between treatments which was expected to be sufficient for key outcomes to return to pre-intervention levels. 100 participants (75 women and 25 men; average BMI of 23.1 kg/m²) completed the study. The median age was 29 years with a range from 18 to 65 years.

On the test day, participants consumed a standardised breakfast. Two hours later, they consumed the assigned snack food. Blood glucose and appetite ratings were measured at baseline and at 15 or 30-minute intervals after consumption. Two hours after the snack, lunch was offered to participants, who ate as much or as little as desired and consumption was recorded. Participants also recorded food intake for the remainder of the day.

The blood sugar response was lower after the almond snack than the biscuit snack. The mean (95% CI) difference in incremental blood glucose area under the curve was 53 mmol/L.min (p<0.001).

Appetite ratings did not differ between groups except for the appetite score at 90 minutes, which was lower for the biscuits compared to the almonds. The mean satiety quotient for hunger when using the Atwater factors for energy was statistically significantly lower for the almonds compared to biscuits (p=0.037). This difference was no longer statistically significant when digestible energy was used in the equation.

There were no differences in calories consumed at lunch between snack groups. However, those in the almond group reported consuming ~150 calories less (on average) over the course of the day compared to the biscuit snack group. There were no statistically significant differences in other nutrients, although there was a non-statistically significant tendency for lower absolute intakes of saturated fat (p=0.056) and sugar (p=0.053) in the almond treatment compared to the biscuit treatment.

The study has a few limitations. The acute nature of the study provides useful information over the short term, but results will not necessarily translate into long-term behavior. Due to the different nutrient composition of the snack foods, energy density was not controlled. Monitoring blood glucose concentrations over longer periods may have been more informative since research has shown that whole almonds reduced glycemia acutely and the effects persisted after a second meal. Finally, the participants were of normal weight or overweight, so results can not be extrapolated to other populations.

Eating almonds as a mid-morning snack, instead of a usual biscuit snack with equal calories, improved participants’ post-snack blood sugar responses and reduced energy intake over the remainder of the day. Replacing less healthy snacks with almonds may help support weight management efforts and help maintain healthy blood glucose levels. More research is needed to determine longer-term effects of this intervention and on broader populations.