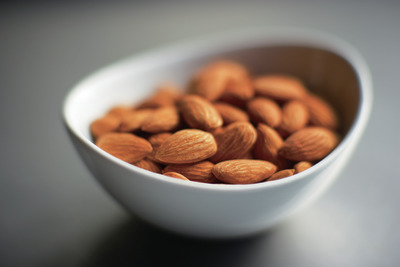 Modesto, CA  – Recent research by Tufts University shows that eating 42.5 grams of almonds each day compared to not eating almonds may help reduce healthcare costs associated with cardiovascular disease among US consumers.1 The study was funded by the Almond Board of California.

Cardiovascular diseases (CVDs) are the number one cause of death globally, according to the World Health Organization, claiming nearly 18 million lives each year2, including in the United States. CVD is also a costly disease to treat and is a huge economic burden. In the UK, for example, CVD was estimated to cost the UK economy €26 billion in 2015. Of the total cost of CVD in the UK, €12 billion (46%) came from direct health care costs.3

The objective of this study was to estimate the cost-effectiveness of almond consumption in preventing coronary heart disease through changes in LDL cholesterol levels in the U.S. population, using both short-term base case analysis and 10-year risk prevention. The researchers developed a model to assess the relationship between eating 42.5g of almonds per day versus no almond intake. CVD parameters included the probabilities of increasing LDL levels, developing acute myocardial infarction (MI, or heart attack), MI-related surgeries, and death due to the disease and surgeries and the cost of disease and procedures in the U.S. population in 2012. The cost of almonds used in this research was also factored into the model and was based on price in the U.S. market in 2012.

The base-case model used in this research, was a study of 150 US adults with increased risk of type 2 diabetes, which showed that eating 42.5g of almonds per day would result in an annual cost savings of $363 compared to eating no almonds. The almond eaters had reductions in CVD risk factors including LDL cholesterol, total cholesterol, body weight and Apoliprotein B (also known as Apo-B, the main protein found in harmful LDL cholesterol).  These improved parameters decreased the average healthcare costs for treating CVD.

When the time horizon was expanded to 10 years, findings were similar in pattern: Per Quality-Adjusted Life Year (QALY; life-year adjusted for quality of life) it cost non-almond eaters $2566 in CVD prevention compared to a cost of just $1806 for almond eaters, or a savings of $760.

Based on these analyses, researchers concluded that consuming 1.5 ounces of almonds per day is a cost-effective strategy for preventing CVD in short term and potentially, up to 10 years.

The Study: A decision model was developed for 42.5g of almonds per day vs no almond consumption and cardiovascular disease (CVD) in the US population. Parameters for the model were derived from the literature, which included the probabilities of increasing LDL cholesterol, developing acute myocardial infarction and stroke, treating myocardial infarction, dying from the disease and surgery, as well as the costs of the disease and procedures in the US population, and the quality-adjusted years. Sensitivity analyses were conducted for different levels of willingness to pay, the probalistic sensitivity analysis, 10-year risk prevention, different costs of procedures and almond prices, and patients with and without cardiovascular disease. The study aimed to examine the cost-effectiveness of almond consumption in CVD primary prevention.

Results: Almond eaters had a $363 lower cost and 0.02 higher quality-adjusted life years gain compared to the non-almond eaters in the base-case model used. The annual net monetary benefit of almond consumption was $1421 higher per person than no almond consumption, when the willingness to pay threshold was set at $50,000 for annual health care expenditure. Eating almonds was more cost-effective than not eating almonds in CVD prevention in all the sensitivity analyses.

Study Limitations: This study had several limitations, including a main constraint of lack of available data. LDL cholesterol was used as mediator of CVD risk, even though the ratio of total cholesterol/HDL may have been a better indication. However, researchers were only able to obtain the data of LDL-C response from study authors. Also, since there are a wide variety of health insurance options in the US, researchers were not able to summarize average premiums, deductibles and out of pocket expenses for CVD treatments,  and average cost for each treatment was used instead. Therefore, results and conclusions may only apply to the uninsured. Other study limitations include the fact that the study focus was on a US population with increased risk of type 2 diabetes using costs of medical treatments and probabilities of developing diseases from studies conducted in the US. Therefore, result may not be generalizable to other countries. Finally, interpretation of results requires caution. Data inputs were constrained by the study design of the literature, especially the probabilities, since the findings were based on inputs from published literature instead of primary data from an intervention cohort. More data may be needed to estimate the costs of almonds and procedures over time.

Conclusion: Consuming 42.5g ounces of almonds per day is a cost-effective approach to prevent cardiovascular disease in the short-term and potentially in the long-term.